Articles like this one began to appear soon after last month’s tragic massacre in Connecticut. The logic embodied in them is straightforward: Guns are designed to kill people, and more guns mean more dead people, therefore fewer guns mean fewer dead people.

The reasoning is so patently obvious, in fact, that anyone who argues against common-sense gun control like a ban on assault weapons and high-capacity magazines is either an idiot or a murderer-in-waiting, and we can’t afford to let either of these join the conversation. We just don’t have time.

I mean, come on, people! How many more innocent children have to die before we figure this out?

Before we jump any deeper into an emotionally-charged conversation, let’s take our own look at the data. And let’s commit to intellectual honesty. No fudging the facts or conveniently excluding data that do not support our thesis.

Let’s zoom out and consider the issue more broadly than others usually do: Murder of an innocent person in any form is evil, and guns certainly aren’t the only way that bad guys kill. They also use knives, swords, baseball bats, crowbars, rocks, pointy sticks, ropes, lead pipes, candlesticks, automobiles, bombs, poison, fire, water, and even their bare hands, among other things too numerous and too gruesome to list. So why analyze only firearm-related murders?

To the murdered innocent and those who love him the precise manner of his demise is of secondary concern, subordinate only to the principal fact that he is dead, that he has been unjustly deprived of life and this evil deed cannot be undone.

How could there be so many murders in those countries with so few guns? Puzzling. The model is probably skewed by all those Spanish-sounding names in the upper left quadrant.

Since we’ve committed to be intellectually honest, we can’t simply exclude these “outliers” and compare the United States against, say, Northern Europe — which is buried in that cluster of blue points in the lower-left quadrant of the graph with practically no guns and practically no murders — even though doing so would clearly support our thesis that fewer guns would make us safer. No, we’ll take the high road and try to find another dataset that controls for factors like living in a narco-state vs. a Scandinavian socialist utopia.

Here is Graph 2, in which we compare Homicide Rate vs. Firearm Ownership Rate by State. The firearm ownership data come from a 2001 survey of 201,881 households by the Behavioral Risk Factor Surveillance System (whose name sounds very safe and trustworthy in spite of containing the word surveillance) and are paired with the 2001 intentional homicide rates by state (compiled from various sources):

This whole exercise is starting to get frustrating. This graph exhibits the same troublesome negative correlation between the firearm ownership rate and the homicide rate as the previous graph, but the best-fit regression line is logarithmic, which means that there might be indirect effects for the first few armed households, i.e. their guns may be indirectly protecting more households than one. The R-square indicates that 35% of the variance in the homicide rate is explained by the firearm ownership rate, which is significant even though the factor’s coefficient contradicts our thesis. Regardless, 65% of the variance in the homicide rate across jurisdictions is explained only by factors other than firearm ownership, which doesn’t bode well for our idea that we just need fewer guns to make our society safer.

But most disturbing of all, three of the four jurisdictions with the most-restrictive gun laws and the lowest firearms ownership rates (Washington DC, US Virgin Islands, Puerto Rico) have murder rates that are 2-3x higher than those of the states with the next three highest murder rates (Louisiana, Alabama, Mississippi), all of which have much-less-restrictive gun laws and rates of gun ownership that are 8-10x higher than the more-restrictive states. And this particular cohort pairing shares a number of otherwise blameworthy factors (high poverty rates, high unemployment, poor public education systems, etc.). Not good at all.

Enter Graph 3, in which we compare Homicide Rate vs. Firearm Ownership Rate for the US (by state/territory/district) and the Rest of World: 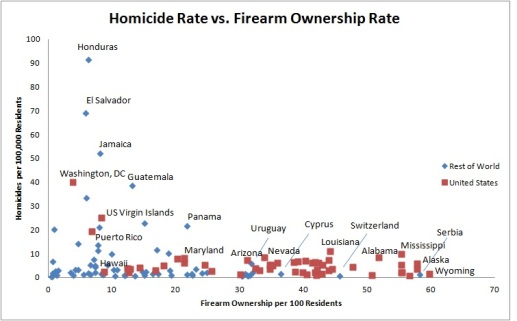 Controlling for US households that own multiple firearms, then, it looks like the distribution of household firearm ownership by state is well within that of the rest of the world. And the same inverse relationship between the firearm ownership rate and the homicide rate seems to hold.

There are exceptions, notably Hawaii and the cluster of blue points that surround it, all of whose names have been invoked by the media with great reverence as examples of the success of strict gun-control laws, but we cannot ignore the reality that more-restrictive gun laws and a reduced firearm-ownership rate can be associated with a significant increase in the homicide rate, both in the United States and the rest of the world.

To say that this observation is counter-intuitive would be a gross understatement.

But really, how bad could it be if we enacted sweeping gun-control legislation at the national level? Let’s assume what looks like the worst-case scenario, with the entire United States adopting the position of Washington, DC:

That’s an 8.5x increase in the national homicide rate.

Perhaps the data do not necessarily support the easy, “intuitive” arguments for gun control after all. It seems that disarming a population is correlated with increasing the variance in the expected homicide rate. There are good outcomes, make no mistake about that. But there are also some very bad outcomes, on the order of 10x worse than the status quo.

But we can still ban those scary-looking assault rifles, right? And those big high-capacity magazines like the terrorists use. There’s clearly no point in having those if you aren’t planning on killing lots of people. They’re no good for hunting, and you don’t need that kind of firepower to defend yourself against a mugger or a rapist or a burglar in the middle of the night.

The most efficient weapon in the history of the world is forced starvation, and the Ukrainian language has a word for it: Holodomor (literally hunger-extermination).

The Holodomor was Stalin’s answer to the problem posed by the kulaks, relatively prosperous farmers who owned their land and had resisted collectivization following the Bolshevik revolution. When Soviet economic policies that favored trading grain for farm machinery caused food to become scarce, the government responded in August, 1932 declaring that all food was property of the state and mere possession of food was evidence of a crime. Crops were seized from the kulaks and redistributed to party loyalists under a quota system, while the kulaks and more-affluent peasants were left to starve. By the most conservative estimates the Holodomor killed 3 million people in Ukraine during the following 12 months and 6-7 million during that same time period across all of the Soviet Union.

One of those victims was my wife’s great-great-grandfather, who died in August, 1933 under forced labor on what had previously been his family farm. He had sent two of his sons to the United States prior to the Bolshevik revolution, and today our family is fortunate to have a collection of his letters to those sons, letters that document in excruciating detail the tightening grip of the tyranny that ultimately took his life.

Can you fathom the loss of 3 million lives in one year? How about 3 million out of a total population of 29 million?

In the United States today, that would be 32.5 million people in a year.

That would be more than 3,300 Sandy Hook massacres every day. For a year.

Here is Graph 4, in which we compare the Holodomor to the overall homicide rates in the rest of the world. The scale of the vertical axis is now logarithmic to accommodate the magnitude of this atrocity. The Holodomor was 100x worse than the homicide rate of modern-day Honduras, currently the world’s most violent country. You will note from the graph that there was no legal firearm ownership in Ukraine in 1932, the Soviets had outlawed firearms in 1929 after years of kulak resistance to collectivization:

The actual food confiscation of the Holodomor was carried out not by bureaucrats but by urban thugs loyal to and armed by the regime. They raided farms, built watchtowers over the fields to ensure the peasants weren’t “stealing” grain (the penalty was summary execution), abused the peasants going to and from work, and amused themselves by raping the women who lived alone in the countryside. These mobs had been half-starved themselves and brainwashed by propaganda into thinking they were doing their civic duty, and there was nothing that the disarmed kulaks could do to stop them.

Think this type of massacre couldn’t happen today? You’re wrong. One is brewing right now: Venezuela has long had a strict permit process for firearm ownership. Last year Hugo Chávez enacted sweeping new gun-control measures, banning all retail sales of firearms and ammunition. And just today, his heir-apparent vowed to crack down on “hoarding” and sent troops to take control of food distribution networks. Who will protect the disarmed producers when the loyalist paramilitary mobs come for their food? 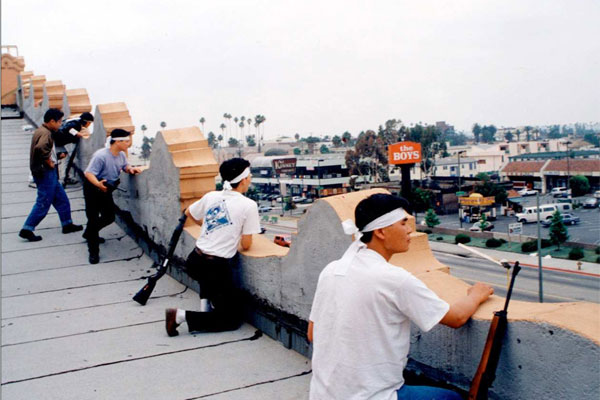 Remember the Los Angeles riots of 1992? 53 dead, 2000+ injured, billions of dollars of property damage. 6 days before the National Guard and the Marines were able to restore order to the city. 45% of property damage was inflicted on Korean-owned businesses even though Koreatown was far from the epicenter of the rioting. The business owners had no one to protect them, their families, and their livelihoods — no one except themselves and their neighbors. One gentleman reported firing more than 500 rounds from his rifle — into the ground and into the air — to defend against the mobs of looters after the police had abandoned his block and before the National Guard arrived days later.

This is precisely why law-abiding citizens must never be banned from owning powerful weapons that are designed to defend against large numbers of armed, violent people when tyranny rises.

Sandy Hook was a tragedy, and we should learn from it and do better in the future. We need to look beyond legal firearm ownership as the cause of murder, since the data show that jurisdictions with stricter gun laws and fewer firearms per capita can have significantly higher murder rates compared to states with more firearms.

And as we try to learn from Sandy Hook, let us never forget the 32.5 million reasons why we have the Second Amendment.