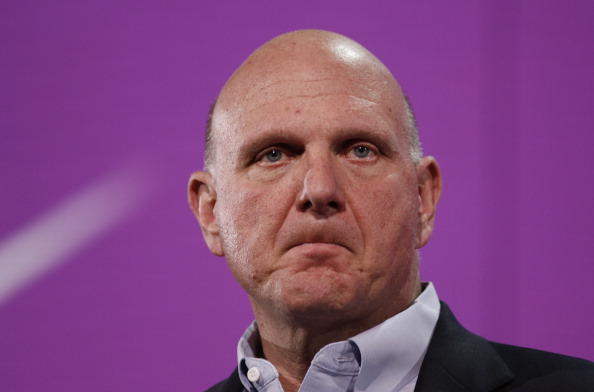 Today Microsoft announced that Steve Ballmer will retire from the company within the next 12 months, a move that the market applauded.

It is hard to imagine Microsoft without him. Steve has more energy and passion for the business than anyone else on the planet. He’s a consummate salesman who loves his products so much that he makes other people uncomfortable and doesn’t understand why. He’s plenty smart, but he’s no technologist. And he’s compiled an unenviable track record, having missed every major wave of technology innovation during the past 13 years.

Music. Smartphones. Tablets. App Stores. Search. Advertising. Social. Cloud. Companies that caught these waves have created in excess of a trillion dollars of market capitalization during Ballmer’s tenure while Microsoft has vaporized a third of a trillion of its own value. Ballmer has presided over what may be the most dramatic illustration of the Innovator’s Dilemma that the world has ever seen.

Of course, Microsoft has (or had) a product (or several) in each of these categories that it missed. But the company has been super risk-averse regarding business model innovation. They never had the courage to put their core businesses at risk, to do anything that might disrupt Windows or Office. So these new and potentially-disruptive products never took off because they were over-featured (Excel on a phone, anyone?) and too expensive for all but the most demanding of the company’s current customers. Recent attempts at business model changes (Bing, Azure, Surface) have failed to gain traction as the company repeatedly waited until a competitor had proved a new business model and then attempted a “fast follower” strategy, though too late to prevent the competitor from creating barriers to entry through economies of scale or network externalities.

And so Microsoft under Ballmer became slow, lacking in confidence, and perennially stymied by its competitors. Many talented employees left for greener pastures, which precipitated a vicious cycle of management frustration, more missed opportunities in the marketplace, and more turnover. Yet the core businesses grew at modest rates for a time under Ballmer’s stewardship, playing to the confirmation bias of the executive team that the emperor was in fact wearing his amazing new clothes and the critics were just too stupid to understand anything.

I scored a front-row seat to this show when I joined an internal startup, the Health Solutions Group (HSG), focused on creating new products for the healthcare vertical. My job was to complete the business model for this offering. Given our market, our assets, the value proposition of those assets in the jobs that customers were willing to hire them to do, our channels, partners, cost structure, and commitments to our internal “investor”, what was the optimal way to monetize our offering? How would our assets be packaged and licensed, and how would these packages be priced?

HSG had its own sales force and could go to market any way it wanted, at least for a while. But our presumed destiny was to land somewhere within the bigger Microsoft machine, and for that to happen our packaging and licensing needed to conform to one of a handful of models administered by a group inside the company called World Wide Licensing and Pricing (WWLP).

WWLP is responsible for licensing and pricing a magnificent amount of business, around $30B per year across all the divisions of the company, so it focuses heavily on operational excellence. It can support only a finite number of business models and each of these needs to be applicable across as many products, segments, and geographies as possible. Microsoft therefore prices its Enterprise products by “servers” (physical or virtual machines that run products for many users) and “client access licenses” (or CALs, licenses for each user that touches a product). These pricing models are arcane, highly abstract, and only loosely related to how enterprise software creates value. Naturally, customers hate this way of doing business.

So how do you take a product that by design can do almost anything (the topic of a future article) and monetize it through such a rigid and odious packaging and licensing framework? You can’t. Well, you can try, but it won’t work. We were required to shoehorn a magnificently innovative product that needed a commensurately innovative business model through a set of resources and processes that represent the lowest common denominator in the enterprise software business. The salespeople didn’t understand the result, nor did the customers, and we didn’t sell much of it. The need to conform to an off-the-shelf business model in an organization of Microsoft’s scale was a major contributing factor to our failure to thrive.

As I began to foresee the outcome of the HSG adventure, I wanted desperately to believe that our experience was anomalous, that somehow this ignorance of business model innovation was not a result of the company’s leadership. A group of people this smart and this successful at having disrupted the computing business would not be falling into the Innovator’s Dilemma themselves, would they?

I regret that I did not seize the opportunity to voice these questions to Steve directly. The only times he and I were in the same room, apart from all-hands meetings, was early in the morning at the gym where he was either galumphing on a treadmill or floating in a whirlpool in the locker room.

Once I passed him on the way into the gym at 5:30am on a Wednesday. He was leaving and looked intensely serious. I smiled and said, “Good morning, Steve.” That was all I could muster at the time. “Hey,” he replied.

In retrospect I wish I would have stopped him and said, “Steve, I’m frustrated. We have so many smart people here. We work very hard, and yet we’ve missed every major wave of innovation in the past decade. What’s going on?”

A meeting scheduled a few days after this chance early-morning encounter provided perspective on how Steve would have answered my unasked question. This meeting was part of a “listening tour” organized by our corporate head of HR, who reported directly to Steve. She scheduled a stop in my building and I showed up early to get a good seat so I could ask this question about innovation.

The only problem was that once the meeting got started, someone beat me to the punch. A woman from elsewhere in Microsoft Research asked my question, almost verbatim. Our head of HR was no typical HR person. She was a developer, someone who had run some big businesses at Microsoft before taking on the HR role, and she was one of Ballmer’s inner circle. I awaited her response in eager anticipation with the understanding that she would provide a window into his thinking on the matter.

The answer just about knocked me out of my chair. I didn’t record it, so the following is not a direct quote, but her response went something like this:

Well, you know, that’s a really good question. It is true that we have missed quite a few opportunities over the years. But what you have to understand about this business is that it’s a very large business, and it generates some very nice dividends. And we really like those dividends, so we have to protect the parts of the business that generate the most profit.

Take search, for example. Could we have invented search in, say, 1997? Of course we could have. But that would have taken time and money. It would have taken a substantial amount of money to come up with search, let’s say $100-150 million. And what you have to think about is, how much better off are our core businesses, Windows and Office, because we invested that $150 million in them in 1997? They are much better off today than they would have been if we had spent that money inventing search.

So have we missed opportunities to innovate? Absolutely. And we will probably miss some more in the future. But we’re doing the right thing by continuing to invest in our core businesses.

Now, in general I believe that there are infinitely many wrong answers to any question, just as infinitely many lines can be drawn through a single point on a plane. But sometimes there is one answer that is precisely wrong, just as there is only one line through a given point that is perpendicular to another certain line in the same plane.

And if there was one answer to my question on innovation that was precisely wrong, this executive had just given it. I was mortified. Shell-shocked. Nonplussed. I suddenly realized that I was watching the Innovator’s Dilemma playing out painfully in real time, and that the problem went all the way to the top of the company.

That answer, and the vital decisions made every day regarding strategy and culture that surrounded and enabled it, diverged from everything I know to be true about how to build a business that creates real value for customers and shareholders, one that succeeds in the long run.

Working at Microsoft meant I would either have to deal with the constant stress of these conflicting systems of belief about innovation, or I could capitulate and adopt the company’s way of thinking. Neither of these were acceptable. I had to get out.

I committed to myself that I would do more diligence on my future employers and stay away from companies that have evolved “antibodies” like this to fight innovation. I haven’t perfected this art of due diligence yet, but it’s getting better with each new iteration.

And so, as the Microsoft board commences a search for the next CEO, I humbly offer one bit of advice: Find someone who is a true innovator, one who has walked the walk both as a developer of products and a developer of disruptive business models. Microsoft’s future success will not lie in imitating today’s market leaders any more than Google, Apple, and Facebook disrupted Microsoft by imitating what goes on in Redmond.

16 thoughts on “Steve Ballmer: In memoriam”