“Figures often beguile me, particularly when I have the arranging of them myself; in which case the remark attributed to Disraeli would often apply with justice and force: ‘There are three kinds of lies: lies, damned lies, and statistics.'”

The debate over America’s response to the ongoing crisis of gun violence reached a fever pitch last month following the mass shooting in Parkland, Florida. I published an article last week calling for all sides of the issue to consider a different perspective: That in America the rates of violent crimes like homicide and robbery seem more sensitive to differences in economic inequality than to differences in the rate of gun ownership.

The article quickly generated tens of thousands of views and thousands of shares on social media. As expected it was received with a mix of praise, ambivalence, and criticism. Some critics accused me of manipulating data to arrive at my conclusion. Others questioned the validity of the source data. Some suggested that my central research question was flawed, that in choosing to study all homicides I had somehow(?) excluded gun homicides. Others wondered why I wasn’t studying mass shootings exclusively. Some disputed my choice of analysis techniques, and others went so far as to say that I have no understanding of statistics or data analysis at all — a claim that my clients, colleagues, and former professors might find amusing.

There are many people on all sides of this issue who will struggle to accept that their current opinion might be misinformed and subject to confirmation bias. They have various ways of shooting the messenger, no pun intended, and that’s fine. I’m doing this work because I’m intellectually curious about what lies at the root of the problem and am eager to revise my thinking based on what I learn, not because I expect that everyone who reads it will applaud. Some have found it helpful, and I do appreciate the many honest questions and kind words of encouragement I have received.

To achieve some scale in explaining the nuances of the work to date, I’m addressing some of the most-frequently-asked questions I’ve received. My hope is that readers will use this information to inform their own opinions on the issue and their discourse in this and other forums.

Death and violent crime rates. The best data source that exists for the various death rates by state, intent, cause, and a multitude of other factors is the CDC’s WONDER database. The FBI also provides data on violent crimes through its Uniform Crime Reporting (UCR) database. Both of these are updated annually and provide several decades of historical data.

There seems to be much confusion surrounding the various measures being used to quantify the problem:

Here is a graphical representation of these measures, to scale, including 10-year average death rates per 100,000 people. Data is from CDC WONDER, as cited above:

Many — perhaps most — gun-control advocates focus on gun deaths, the blue area in the chart above. This is the broadest measure of the firearm-related death rate and includes gun suicides (about 2/3 of the total), gun homicides (about 1/3), and sometimes unintentional gun deaths (that little blue sliver below homicides that’s too small for a label).

Problems with the “gun deaths” measure

The problem is that factors other than guns can predict the overall suicide rate and homicide rate, and plenty of gun-substitutes exist that can be used to take one’s life or that of another.

What happens to the overall rates of homicide and suicide when there are fewer guns among a population? Do these rates go down, stay the same, or go up, and by how much?

These questions are much more interesting and valuable to study, but the gun deaths measure ignores them in how it frames the issue. Perhaps the goal of a policy change should be to reduce all homicide and suicide deaths as much as possible, not just those related to guns.

Second, there is no statistical relationship between a state’s gun homicide rate and its gun suicide rate. This observation suggests that the idea of combining these two measures into one for the purpose of informing public policy decisions may be misguided.

Here is a scatterplot of each state’s gun suicide rate vs. its gun homicide rate from the same dataset cited above: 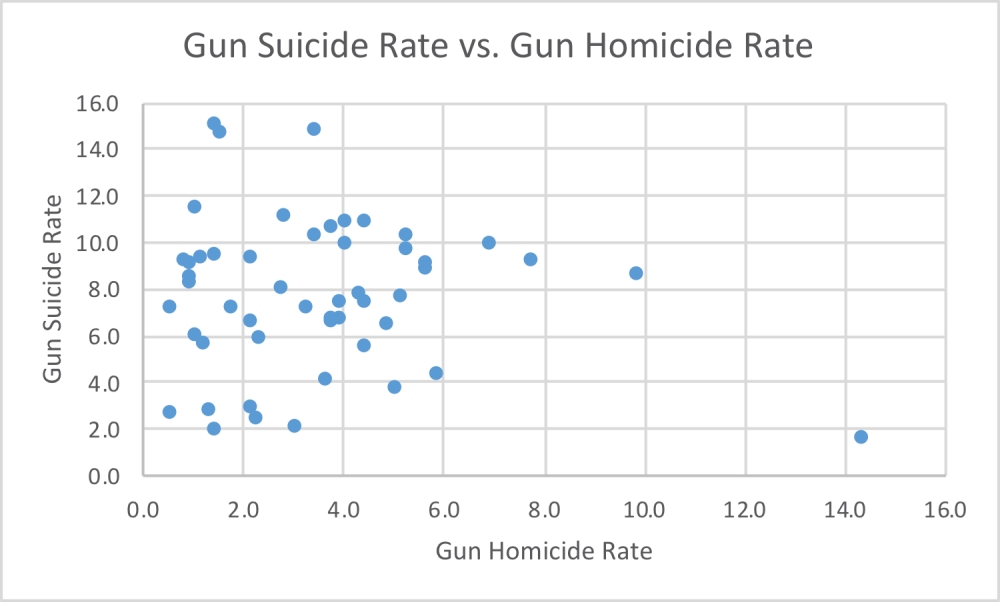 That’s a much more interesting correlation. A strong relationship seems to exist between these two variables. As the gun homicide rate goes up, so does the non-gun homicide rate. If you know the value of one variable for a given state, you could guess the value of the other variable within a narrow margin of error. This relationship may imply the existence of one or more common factors that explain the variance in both forms of homicide. And does this strong correlation hint at a substitution effect — meaning that if guns didn’t exist, murderers would find another way to do the deed?

I think the answer is obvious. And I’m going to continue studying homicide and suicide, of all causes, as two separate and independent problems.

I think anyone talking about an easy solution to “gun deaths” is likely ignorant — however good their intentions — of just how meaningless this measure might be. It fails to appreciate the differences between its underlying problems of suicide and homicide. It fails to account for any possibility of a substitution effect in either problem.

It does make for a bigger problem to solve and easy sloganeering, supported by clean first-order statistics easily packaged into social media memes that tout the promise of a simple gun control narrative.

But managing policy to a measure that muddles the structure of its underlying problems for marketing purposes? That will lead only to disappointment.

Edit: Sam Fisher asked in a comment below for a non-gun vs. gun suicide scatterplot. Here it is, along with a matrix showing the correlation coefficients for all the measures discussed above. 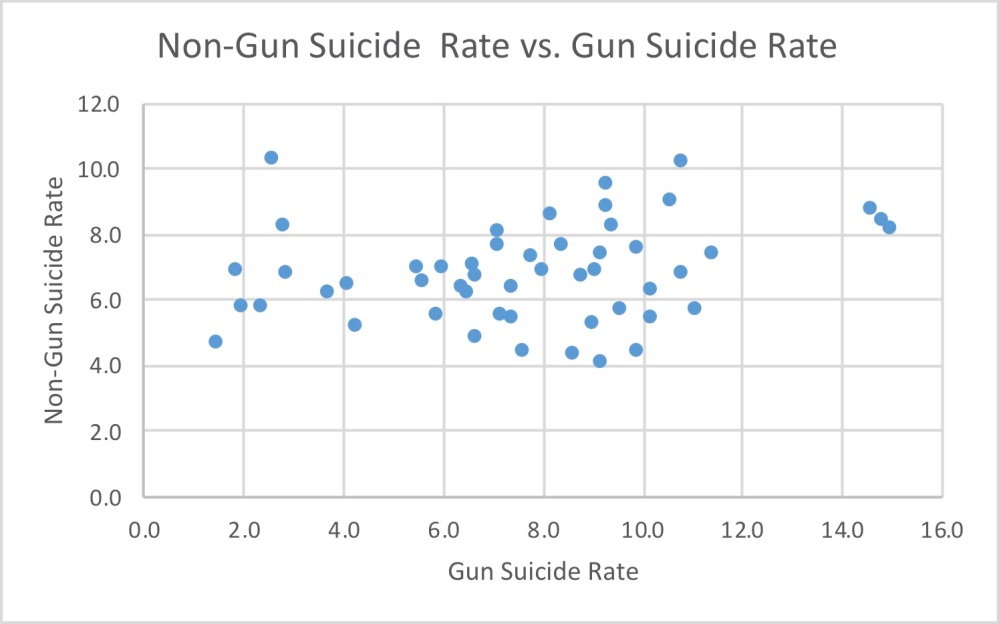